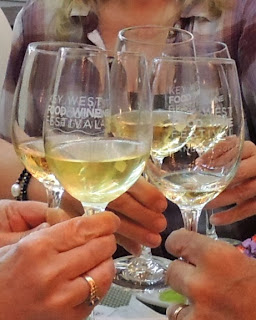 Key West has long been serious about its libations, but the rise of the Key West Food and Wine Festival to the top of the hot-foodie- destination list after only two years shows that it has more to offer than just the perfect margarita.

With its quirky vibe and come-as-you-are attitude, the Conch Republic (Key West’s nickname since its tongue-in-cheek secession from the United States in 1982) calls for all to leave their pretensions on the mainland. You’ll want to kick back and indulge, in true Key West style, in wines from around the world and local chef specialties featuring the fruits of the sea. This tropical bacchanalia takes over the streets of Key West’s historic Old Town in January; the 2016 festival runs from Jan. 27 through 31.

On Wednesday night the top event is the Wine Around Neighborhood Strolls. The Old Town trolley whisks you to your choice of one of three historic areas. Part of the fun is making friends with fellow culinary connoisseurs while watching local chefs prepare their best nibbles, which are paired with wines generously poured into crystal souvenir glasses etched with the festival logo. Jean Hilkens, a 20-something bon vivant in wire-rimmed glasses, says he was lured here all the way from Amsterdam — he saw the festival’s logo on Facebook and his mind was made up. “I looked at that picture with the wine and the water, and I said, ‘That’s where I want to be in January when it’s cold!’” 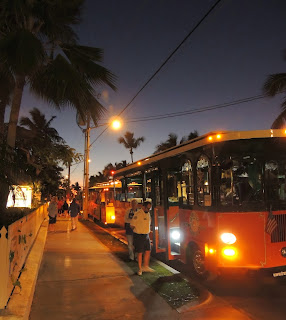 Friday night’s Grand Tasting finds folks sipping wine to music performed by the Key West Symphony. Wine reps pull out their best selections for this more intimate crowd, and shorter lines mean more one-on-one time. Sean Sullberg of Michael Sullberg Wines engages in animated conversations about his day-to-day work. “The people here are fascinated with what it’s like to be out in California working at a winery, and the steps we take, from checking on the fruit to barrel tastings,” he says.
Wine By the Docks

On Saturday afternoon, the trolley fills up once again for a 10-minute ride to neighboring Stock Island’s Hogfish Bar and Grill for the big Key West Shrimp Boil. Set on the last vestiges of a working waterfront, the open-air eatery evokes a sense of Old Florida, and the sweet Key West pink shrimp caught by Rickey Toomer, a member of a longtime fishing family, come straight off his boat, JT.
Shrimp, Florida lobster tail, smoked sausage, corn on the cob, new potatoes, lemon halves, bay leaf and cilantro in red mesh bags are cooked to perfection and served at the wooden picnic tables under the tiki hut. Slices of fluffy white Cuban bread are used to sop up every last drop of the spicy juices. As the steam, scented from Old Bay spices, rises from the huge pot in the outdoor kitchen, wine from Washington State’s Hogue Family Vineyards flows nonstop. 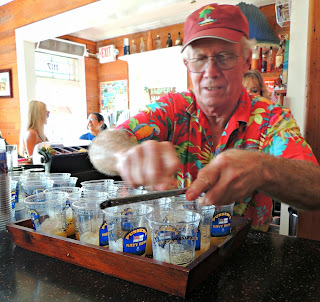 Saturday night brings Duval Uncorked, a mile-long food and wine tasting on Duval Street. Among historic architecture, chic boutiques, funky art galleries and hidden inns, hundreds of hungry foodies, with wine glasses hanging from lanyards draped around their necks, turn out for this upscale signature event. Amid Key West’s free-roaming chickens and the bustle of mopeds, bikes and electric cars, volunteers in white toques and blue aprons stand on corners and guide the wayward. With 40-plus stops to be made in three hours, a strategic game plan comes in handy; you can always adjust on the fly after swapping tips with others at what feels like a neighborhood party.
The first stop is the colorful Towels of Key West shop. Amid beach towels for sale, local chef Alice Weingarten, in her trademark leopard-print chef’s hat, white pearls and red lipstick, serves small plates of spicy conch ceviche to the crowd. The sea snail is tendered with fresh lime juice, red, green and yellow peppers, cilantro, red onion, and her secret ingredient — sriracha. “You can tell the locals from our visitors by how they pronounce ‘conch’ [kongk versus kaunch] and their great surprise at how good it tastes,” she says.
At Vino’s on Duval, one of Key West’s newest wine bars, vintner Donald Patz provides tasting notes while serving his Patz & Hall Sonoma Coast pinot noir. Dessert is cabernet and chardonnay sorbets from the Flamingo Crossing ice cream shop.
Hit the Market

At Sunday afternoon’s Outdoor Wine Market, wine reps set up tasting booths in the parking lot of the restaurant store on Eaton Street; inside, wines served at the festival are for sale by the bottle. Young guys dressed as modern-day pirates hack off the tops of fresh coconuts with machetes and offer cups of the water — the perfect hydrating tonic after a wild weekend — to visitors.
Where to Spend the Night

Wind down at La Mer Hotel & Dewey House. These two connecting homes at the more subdued end of Duval Street provide a quiet respite after a day of festivities. La Mer’s upstairs oceanfront king room has a straight-on view of the Atlantic Ocean and a private wraparound balcony overlooking a sandy stretch called South Beach. Listen to the waves rolling onto the shore, where sun worshipers spread their towels.
The room’s gabled architecture and a recessed bed nook create a sense of both space and coziness. Sink into the brown overstuffed chair, prop up your feet on the ottoman and watch the palm trees swaying outside your window — you’ll never want to leave. On the patio downstairs, tea is served in the afternoon and, in the morning, a bountiful breakfast with made-to-order waffles and a steaming cappuccino.

Posted by Claudia Miller at 7:14 AM No comments: 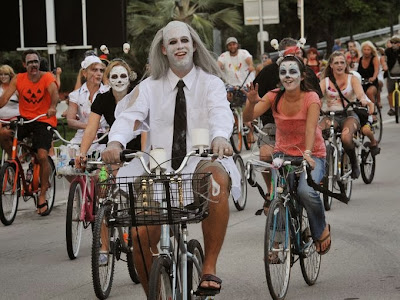 This 10-day bacchanalia can be overwhelming for the uninitiated, but our local expert's insider tips will make your getaway to this tropical island unforgettable. ...Read More.
Posted by Claudia Miller at 7:55 AM No comments: