Supermoon Shines in the Florida Keys 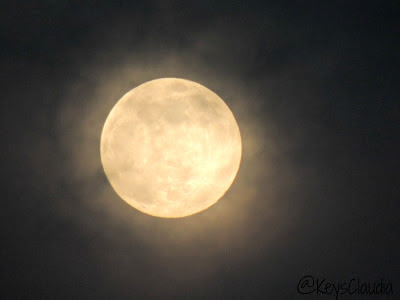 While it was set to peak on Sunday, June 23rd, the "supermoon" did not disappoint stargazers Saturday night in the Florida Keys. I was on the docks in Islamorada where a small group had gathered after the sun went down. We watched over the Atlantic in anticipation, cameras at-the-ready, for the moon to rise above the horizon and a low bank of clouds. Also known as a perigee moon, it appeared 14% larger and 30% brighter, making it perfect for photo-ops. While you'll be able to spot another "supermoon" on July 22, it won't be this close again until August 10, 2014.
Posted by Claudia Miller at 7:10 AM 2 comments:

Peaceful Parasail over the Florida Keys

As I floated on a rainbow parachute above the Florida Bay behind the Key Largo Hilton, I got a birds-eye view of the Florida Keys. My first few minutes parasailing were spent with a white-knuckled grip on the straps, but soon, I simply forgot to be scared. Small puffy clouds decorated the azure sky, and I could see 20 miles in each direction.
To the west, the uninhabited islands and green mangrove nurseries dotted the Everglades National Park. To the east, I could see across the island of Key Largo to the expansive Atlantic Ocean. The skinny islands of the Keys were strung together in one long line. The shallow water below was a painting of abstract swirls, circles and stripes in a palette of aquamarine, indigo and powder blue. The water, lightly churned by the wind, had a soft opalescence, interrupted by the circular wake of the Caribbean Watersports boat.

It was so peaceful and quiet floating up in the clouds. I relaxed into the seat, swinging my legs back and forth like a kid. I laughed each time a gust of wind tugged me up, as if being pushed on a swing. Then, I would hang there, seemingly weightless. On the way back down to earth, I had a refreshing toe-dip like a fish skimming across the surface of the water. Sliding gently back onto the boat, the only thing I didn’t like about my time in the sky was that it was over too quickly.


Originally published on floridatravellife.com
Posted by Claudia Miller at 10:00 AM No comments: 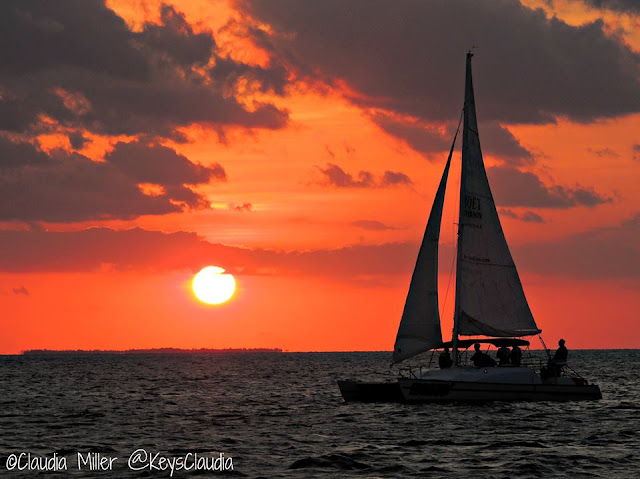 I caught this on-the-water shot aboard the Danger Charters Wind & Wine Sail in Key West. The limited number of passengers and world-class wines make it my favorite sunset cruise in the Florida Keys. Coasting through Key West Harbor, you have plenty of opportunities for stunning silhouette shots. The main challenge: taking a steady picture on a moving boat!
Posted by Claudia Miller at 11:14 AM No comments: 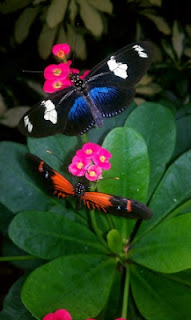 Whenever I close my eyes and envision my “happy place,” it closely resembles the Key West Butterfly & Nature Conservatory. I was enchanted when I entered the 5,000-square-foot glass-enclosed greenhouse tucked away at the southern end of Duval Street, the main drag in Key West's historic district. More than 800 butterflies fluttered merrily about the bright tropical blooms, accompanied by melodious birdsong and a splashing waterfall. Designed around a Victorian theme with a soaring 37-foot ceiling, a koi pond and a white gazebo, the garden was a natural theater with one small drama after another.

Two large Blue Morpho butterflies shimmered as they danced a circular mating path along the pebble-line stream. Turtles jockeyed for the best spot to sun themselves on the footbridge. A pair of candy-colored striped Lady Gouldian Finches puffed up their feathers in a brief territorial dispute among the branches of a Jatropha tree. I had to watch my step, as Painted Button quail, small brown-and-white balls of feathers, were underfoot along the winding brick path. Flitting from red powder-puff flowers to fuchsia impatiens, the butterflies stopped just long enough for a sip of nectar and a photo-op. An orange-and-black longwing butterfly landed on my toe, and a woman walking by commented, “When a butterfly lands on you, it means good luck.” The butterflies come to the conservatory from farms around the world in the chrysalis stage. I watched as they brought out some hatchlings, and a Blue Morpho made his first flight into a new world.

Originally published on floridatravellife.com
Posted by Claudia Miller at 2:16 PM No comments: 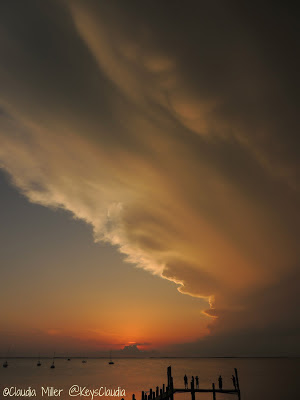 Living in the Florida Keys, all you have to do it look up at the sky to keep things in perspective. Because these dramatic storm clouds were moving in across the water, I chose to pull back for this sunset shot. Check out the size of the people on the dock on the lower right hand corner to get a feel for just how small we are in the face of Mother Nature.
Posted by Claudia Miller at 7:34 AM No comments: 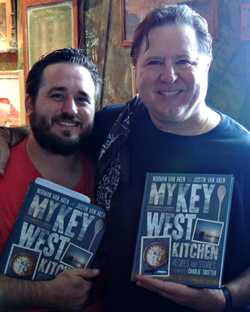 Father-and-son chef team, Norman and Justin Van Aken, have joined forces with Keys chef, George Patti, to host a Father's Day dinner at M.E.A.T. Eatery and Taproom in Islamorada. The creative menu will include alternating courses from each chef starting at 4 p.m. Sunday, June 16.

The Van Akens met Patti when they dined at M.E.A.T., and both said they bonded over a love of making chorizo from scratch. They were soon coming up with different ways to collaborate, and Father's Day seemed a perfect fit.

"We really enjoy George's gutsy, hip, pub fare," said Justin Van Aken. "He and I are both first-time fathers, and we'll have our dads in the house as well. The event is really going to be something special."

Norman Van Aken is known internationally as the "founding father of New World Cuisine." Currently, he is the chef and director of restaurants at the Miami Culinary Institute in Downtown Miami, and he is the chef-owner at NORMAN'S at the Ritz-Carlton in Orlando. He is the only Floridian inducted into the prestigious James Beard list of "Who's Who of Food and Beverage in America."


Recently he co-wrote "My Key West Kitchen" with son Justin. Written as an homage to the multicultural cuisine in the Florida Keys, the cookbook features recipes inspired by some of their favorite people and eateries in Key West past and present.

At the Father's Day event, the duo will whip up several dishes from the cookbook such as Shrimp Po' Boy with hot sauce vinaigrette, fashioned after the dish at Half Shell Raw Bar in Key West.

"Like many things in the book, we eat something somewhere--like the Po' Boy at Half Shell or the pork chops at El Siboney--but we don't ask for a recipe," Norman Van Aken said. "We go home and try to recreate it somewhat faithfully and somewhat with the Van Aken spin."

They'll also be serving the unique Milk-Braised Pork Tacos with quick-pickled red onions, which was originally inspired by an Italian recipe.

"You don't normally think of braising in milk," Van Aken said. "You'd think that it would separate and break down, and that's exactly what happens. It does separate, but the sweetness of the milk becomes almost like a flan in a way. The pork becomes quite moist and delicious."

Patti, the chef/owner at M.E.A.T. and Tasters Grille and Market in Tavernier, will serve some of his specialties like lobster empanadas and homemade chorizo sliders. He will also put a spin on chicken and waffles by doing a Chicken Fried Quail and Waffles with a maple syrup gastrique.

Known for its "gourmet fast food" concept, M.E.A.T. has gained a loyal following, especially for savory items like bacon and porchetta that Patti cooks up in his cherry wood smokers. The restaurant has been garnering media accolades such as being named one of the top five best new restaurants in the Keys on tripsmarter.com and highlighted in Florida Travel and Life Magazine for their duck fat-fried French fries.

Beer expert, Rich Abrams from MicroMan distributing, will pair each course with an array of five craft beers. "We'll be using regular craft beers, as well as seasonal drafts," said Patti. "It's just like you're pairing wine, and I like a yin and yang approach. If a beer is sweet, pair it with spicy food, and if the beer is bitter, it gets sweet food."

Nutella-and-Guinness Adult Milkshake Shooters by Patti and a Georgia Peach and Pecan crisp with Sour Cream-Vanilla Ice Cream by Justin Van Akin will top off the meal. The Van Akens will also be on-hand to sign copies of "My Key West Kitchen."

M.E.A.T. Eatery and Taproom is located at mile marker 88 Oceanside in Islamorada. The event is $80 per person. Limited seating is available, so reservations are required. Call 305-852-3833 for more information.

Originally published in L'Attitudes in the Keynoter and Upper Keys Reporter.
Posted by Claudia Miller at 2:15 PM No comments: