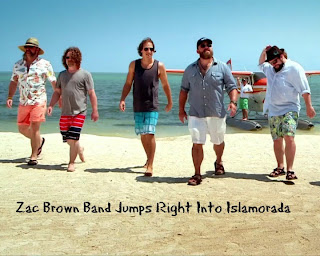 The Billboard topping country group, Zac Brown Band, recently released the video for their new song, "Jump Right In," and I was delighted to see a few of my fave Florida Keys spots. The band took over the tree-house-style tiki bar, Rumrunners, at Postcard Inn at Holiday Isle, as well as the gorgeous beach at Morada Bay Restaurant in Islamorada. In the bar, you'll spot the patrons drinking potent rumrunners, which were actually invented at Holiday Isle. In the spirit of product placement, they're also quaffing Land Shark, a beer from Jimmy Buffet's Margaritaville Brewing. Perhaps a quid pro quo, since he appeared in one of their past videos, "Knee Deep?" Full of sand, palm trees, and tropical breezes, the locale looks like it could be anywhere in the Caribbean, but you can find it right here in the Keys.

Update: I finally tracked down the home of the hammock on the dock--the Moorings Village Resort, located right across the street from Morada Bay.