Seaplane adventure to the Dry Tortugas 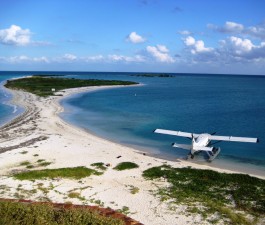 As our plane from Key West Seaplane Adventures taxied down the runway at Key West International Airport, Lenny Kravitz started crooning through my heavy headphones, “I wish that I could fly/into the sky/so very high/just like a dragonfly.” It seemed the pilot, Johnny, had an appropriate playlist for the 40-minute flight to the Dry Tortugas — seven remote islands 70 miles to the west of the Florida Keys. With his bare feet and scruffy salt-and-pepper beard, he looked the part of a Keys native and summer Alaskan bush pilot. The sturdy 10-passenger De Havilland DHC-3 Otter aircraft was in the air so quickly that my heart was pounding in a combination of terror and excitement. Key West grew small, and the striped buoy planted at the Southernmost Point stood out like a beacon. One of the World Championship Powerboat Races was in progress below, and brightly-colored speed demons rocketed through the water at 125 mph with helicopters buzzing above.

Once at the cruising speed of 130 knots, Johnny banked to the east and west to show us points of interest like the shadowy outlines of shipwrecks, remnants of Rebecca Shoal Lighthouse and the curving mangroves of the Marquesas Islands. The sunlight shimmered on the water broken only by the shadows of towering clouds that seemed close enough to touch. The sea floor was a swirl of dynamic blues reminiscent of Van Gogh’s Starry Nightwith turtles and stingrays gliding through. Soon the impressive red brick outline of Fort Jefferson — America’s largest 19th-century coastal fort — appeared on the horizon. The water landing was a bit bumpier than I anticipated, but we were quickly floating to the deserted white sandy beach for an afternoon of snorkeling and exploring.

Originally published on floridatravellife.com
Posted by Claudia Miller at 2:14 PM