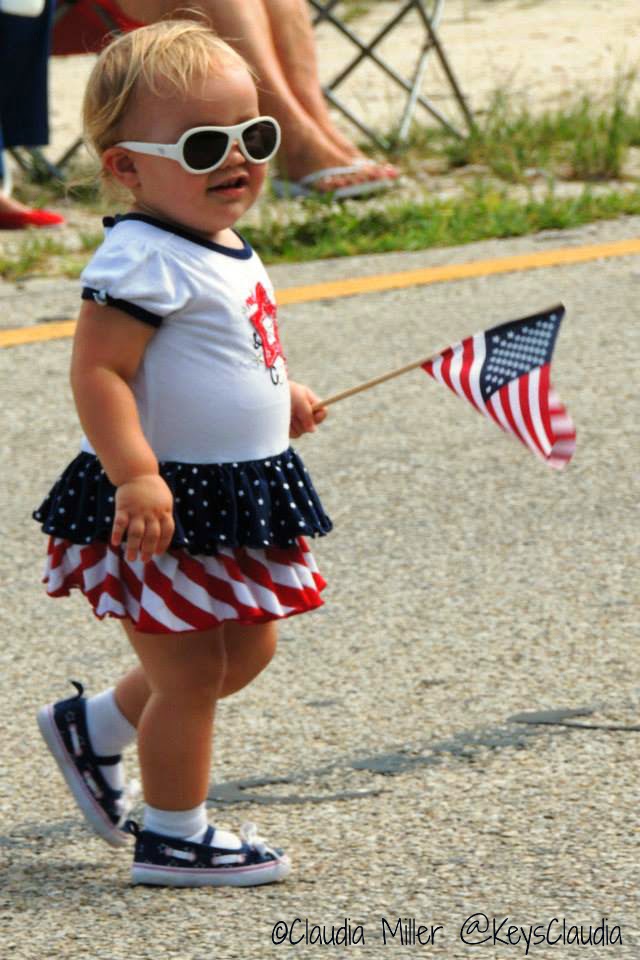 Key Largo denizens take Independence Day celebrations seriously, starting bright and early at 10:00 a.m. with an old-fashioned parade. Now in its 39th year, the event draws thousands of locals and visitors. When I went to my first 4th of July Parade in Key Largo, I was impressed with the fervor of the locals, who stake out a shady spot along the northbound lane of U.S. Highway 1 at least an hour before the parade starts. Tents and umbrellas were pitched, lawn chairs unfolded. Barbecues were lit and bloody marys passed. Adults, kids and even dogs were decked out in red-white-and-blue attire, including pompoms, leis, necklaces, hats, and of course, American flags.

A procession of fire engines, wrapped in bunting and balloons, kicked off the parade with sirens and lights from mile marker 98 to mile marker 100. Floats and trailered boats were decorated to the theme, “Flagler’s Railroad to the Sea,” and included a train engine, caboose and costumed characters from 1912. This year’s theme, "Salute to Patriots of Liberty," should prove equally entertaining.

In the evening, an old-fashioned Community Picnic, with activities for kids and adults, is set for 6:30-10:30 p.m. at the Rowell's Marina (mile marker 104.5 Bayside). The Fireworks start at 10:00 p.m. over Blackwater Sound. Boat owners can watch the pyrotechnic display just feet from the floating fireworks barge. On land, the best seating can be found at Sundowners and Senior Frijoles restaurants, Caribbean Club and Marriott Key Largo Bay Resort.
Travel tip: If you drive through Key Largo on July 4, keep in mind that the northbound lane of U.S. Highway 1, from mile marker 98.2 to mile marker 100, is closed from 10:00 to 11:30 a.m. Traffic will be rerouted onto the southbound lane. If you get stuck, just pull over and enjoy the parade. You won’t regret it.

Related articles:
Top 10 Money Saving Tips for Travel in the Florida Keys
Travel Tips: What to do in Key West with Kids
Posted by Claudia Miller at 1:41 PM