I started my gastronomic marathon in true Key West-style at Thursday's intimate Barefoot Beach kickoff party at the Southernmost Resort.

After noshing on shrimp tacos and tuna ceviche from the Southernmost Beach Cafe, I found myself back for seconds of the spongy Barbancourt Rhum cakes paired with a shot of their Pango Rhum, blended with mango and pineapple.

I joined the fierce four, Greg and Donna Daniels with Angel and Tracey Gonzalez, on a Neighborhood Stroll at the Key West historic seaport. As locals, they easily led me through the maze of boardwalks and staircases to stop for tidbits like bacon wrapped scallops, lobster cake and Maine lobster escargot.
(Angel Gonzalez, Greg Daniels, Tracey Gonzalez, Donna Palmieri pictured)

We rambled onto the beach at the Blue Mojito Bar at the Hyatt Resort where I ended the night with my toes once again in the sand. We sat around the bonfire in Adirondack chairs making s’mores and sipping a dry prosecco, Villa Sandi Il Fresco, until someone suggested a ghost story.

At Friday's Grand Tasting in the quaint historic Key West Aquarium, the wineries presented their best wares in front of tanks filled with stingrays doing back flips across the top of the water and nurse sharks swimming lazily below. 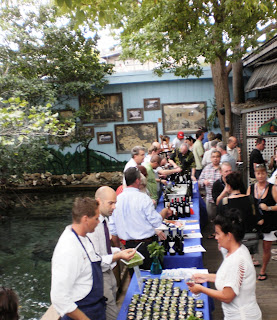 The cheese table overflowed with generous chunks of fresh bread from Cole’s Peace Artisan Bakery, which I layered with decadent St. Andre triple cream cheese and an Etude pinot noir.

While it was hard to choose, my fave preparation was the pan roasted Florida lobster tail with slow braised oxtail risotto on a crisp plantain by Chef Kevin Montoya of Tavern N Town.

I couldn’t stop nibbling on the Key lime cannolis from the Key West Key Lime Pie Company as they were passed around the venue, and I sampled the new Francis Ford Coppola’s Sofia riesling, the soft fruity flavors of pineapple and lime zest cementing my belief that I love anything with the Sofia label.

Festival organizers followed through on their promise that we would see mermaids at the Grand Tasting, and local Key West character, KP, camped it up in style, gamely posing for photo ops throughout the night. 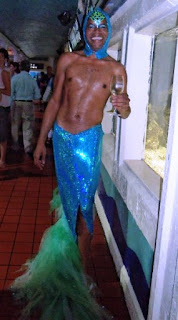 Saturday night brought the longest lap in our race, literally, as I joined the rollicking street party on the mile-long tasting down the main drag in Old Town for Duval Uncorked.
Sweet Tea’s charmed with their tropical take on southern food, a hearty lobster mac and cheese, paired with Beringer private reserve chardonnay. Gelato on Duval plied us with passed smoothie samples, a buffet of rich chocolate and red velvet cakes and spoonfuls of their creamy gelato.

The camaraderie was palpable amongst the 500 festival attendees, easily identifiable by the small tasting glasses dangling from our necks by bright pink lanyards. The volunteers, donning chef’s toques guided us down side streets and hidden entrances to the 44 stops.

Saturday night brought the rollicking street party on the mile-long tasting down the main drag in Old Town for Duval Uncorked. With 44 stops in four hours, the camaraderie was palpable amongst the 500 festival attendees with small tasting glasses looped around their necks.

I lingered the longest by the splashing waterfall pool at theTropical Inn B&B. Its small doorway on Duval Street led back into a lush private garden where Sean Sullberg of Michael Sullberg wines served up a lip-smacking chardonnay that complemented Anna Toole-Hutchens’ SaborAM wine-infused cheesecake on a stick called "GINY Pops.” 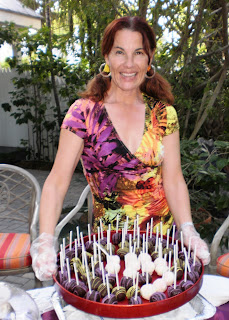 We took our victory lap on Sunday morning at the final festival event, the outdoor Wine Market at The Restaurant Store, a more laid-back affair where even puppies like Callie came out to play. 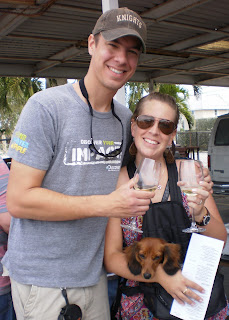 My “find” at the market was the collection of Clif Family wines, newly released in Florida by the same company that makes Clif bars. I sampled several of the tasty Climber varietals and chatted with Phil Roberts about their eco-friendly standards.

Colorful vendors rounded out the event like Midge Jolly of Florida Keys Sea Salt, a small family farm specializing in solar evaporated sea salt sourced from local waters. The third year of the Key West Food & Wine Festival was a resounding success, and I already have the dates for next year (Jan. 24-27) on my calendar.
Posted by Claudia Miller at 8:39 AM