Paintings of the Key Largo 'Hermit' 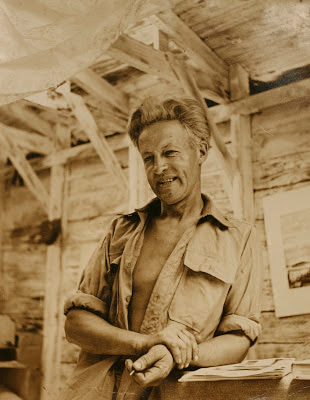 In 1992, collectibles dealer Chuck Faulkner made an unusual discovery in a bag that was discarded from a storage unit in Kissimmee. It was filled with close to 170 paintings by Harry J. Sonntag, who was also known as the “Hermit Artist of Key Largo.”


The woman who had cleaned out the unit said she and her husband had found the bag under a bed in a rooming house in St. Thomas in 1960.
Faulkner was intrigued by the artwork, as well as the photos of the artist and newspaper clippings from the Miami News dated 1952, ’53, and ’54 that were also in the bag. He began to do some digging into the life of the artist and brought the collection back to Key Largo.
“When you open up a bag of artwork that somebody is ready to throw away and find this guy’s life just laid out there, you realize that there’s a person there and a story to be told,” Faulkner said.
In July 2000, four pieces of art and a history board about Sonntag were displayed at the City Hall in Kissimmee. Soon after, a local woman, Lyda Hadley, contacted Faulkner and told him that she knew Sonntag in the 1950s in the Keys. She gave him photos of Sonntag working in his studio, at his gallery and at his home tending the garden. She also passed on a signed watercolor and an essay that she did on Sonntag for a creative writing class in 1952.
Sonntag was born in Astoria, N.Y., on Oct. 12, 1900. When he was 16 he started his art studies in New York City at the Pratt Institute and later at the Art Students League. He left New York in the ’40s because he felt like the artists were copying each other’s styles and there were no fresh ideas.
“He didn’t want any influence, so the only way to not have any influence was to get away from artists altogether,” Faulkner said.
For almost 10 years he traveled around the United States, visiting New England, Arizona, California and Washington. He lived in the Devil’s Lake area of Wisconsin for three years before settling in Key Largo in 1948 or 1949. 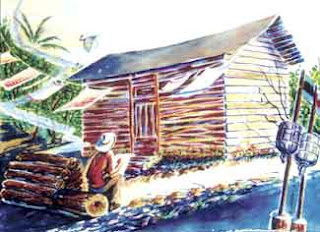 Sonntag built a wooden shack from driftwood and other debris down by the bay near Rock Harbor. He grew a garden and lived off the land, and fishermen would often throw him a fish or a turtle to eat. Faulkner said that he talked to locals who recalled that Sonntag always had a fire going, so he could use the smoke to cover his body and keep off the mosquitoes.
In Hadley’s essay, she paints an interesting picture of how Sonntag viewed his place in nature. When she was visiting him, he called a pelican that was always around his camp his “guardian angel.”
“Whenever I’m hungry, she comes along and shows me right where the fish are,” he said.
When a hurricane was approaching the Keys, Hadley tried to persuade him to come to Miami, but he wouldn’t budge. He said, “No, this is my place here, with nature, and nature will take care of me. The old pelican is not going to Miami, why should I?”
When she returned to the Keys after the storm, the area was demolished, but the pelican was still there sitting on a rock, basking in the sun with Sonntag nearby cooking fish.
Sonntag took over an abandoned key lime packing shed along U.S. 1, where Anthony’s clothing store is today, and converted it into the Key Largo Art Gallery. It was one of the first art galleries in the Keys. 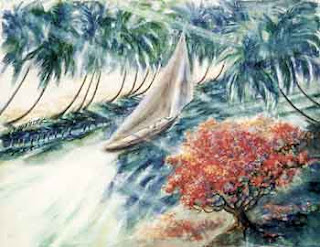 He painted what he saw around him every day using vivid watercolor paints and fluid brushstrokes. He often portrayed the local fishermen at work and the natural scenery, creating a visual history of the Keys during that time. Faulkner said that some of the works had prices on the back that ranged from $55 to $65.
Many of the works in the collection portray places that are recognizable like the waterfront of Rock Harbor, which was known for its commercial and private fishing, as well as the Mandalay. He also painted Rusty’s, which was a bait and tackle shop on Tavernier Creek near the bridge and the Upper Keys Sailing Club. While he was at an art show in Key West, he even painted the street where he was selling his works.
In 1952, Sonntag told the Miami News, “Art is the universal language, and my desire is to bring beauty to the multitude so people may realize how lovely is this world.”

In 1955, the Key Largo Art Gallery burned, and Sonntag told everyone that his life’s work was in the building. But Faulkner has photos of the gallery’s interior that shows many of the paintings now in Faulkner’s collection, so the collector knows that wasn’t true.
An article ran in a Homestead newspaper with a headline that said, “Famous art gallery destroyed by fire Saturday.” Faulkner didn’t find out about the gallery burning until about five years ago, when historian Jerry Wilkinson found that article while doing research.
After his gallery burned down, Sonntag moved to the Virgin Islands, and Faulkner has several works from his stay there, which came with the other paintings. Sonntag then went on to St. Petersburg, where he died in 1991, just one year before the collection was found. Faulkner has found no other works by the artist.
“I wonder if he was sitting in St. Pete frustrated and asking what happened to this art,” Faulkner said. “Did it get thrown away? Did it get destroyed? And it was sitting only 70 miles away in a storage unit.”
It is fitting that Sonntag’s works are now on display at the current Key Largo Art Gallery. Faulkner is selling prints from the collection, but he has not sold any originals. His goal is to keep the works together and find them a home where their historical value will be highlighted.
“This story needed to be told, and this work needed to be seen down here,” Faulkner said. “It’s part of this history.”
Posted by Claudia Miller at 6:50 AM