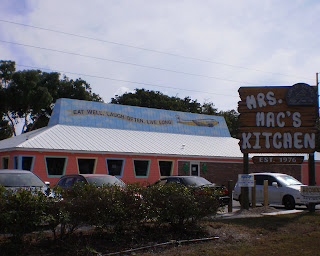 Anyone driving by Mrs. Mac’s Kitchen in Key Largo around lunchtime is likely to slow down at the mini traffic jam caused by diners trying to squeeze into the small parking lot of the popular eatery.
Owner, Angie Wittke, took note and decided it was time to act. She’s opening Mrs. Mac’s 2 within the next week for lunch and dinner less than half a mile south of the first location at mile marker 99.4.
“I decided it was time to expand because we have more mouths than we can feed,” Wittke said. “We’re really restricted in space at the original location. We have a lot of guests who would love to eat with us, but we can’t accommodate them.”
The new restaurant has approximately double the square footage and number of seats, made up of brown comfy booths lining the walls, four-tops in the center, a large bar and an outdoor pet-friendly butterfly garden. It also offers a larger parking lot and an ideal location to catch the attention of tourists passing through—in the median between the north and southbound lanes of U.S. 1.
“A lot of times we’re missed if people don’t catch us on the way south,” Wittke said. “They definitely don’t catch us on the way north because we’re not visible. We’ve already had people stopping in from both directions to see if we’re open.”
Wittke gutted and renovated the plain building, which was once a Pizza Hut, and with the help of local artist and sculptor, Kim Brandell, transformed it into a colorful Keysey restaurant.
The unique and whimsical interior features organic sea-themed paintings on the epoxy resin floors, a tall palm tree sculpture in the middle of the dining room, an octopus chandelier over the hostess desk and a shell-inlaid bar.
“I was at the point in my 40-year career that I was looking for the appropriate location to highlight my work for the local community,” Brandell said. “I wanted to make Angie’s new restaurant ‘a must see’ spot for both locals and tourists, as well as like my second showroom.”
In a nod to the signature license plate-covered walls at the original Mrs. Mac’s, Wittke has lamps made from license plates hanging over the booths. She also created shadowboxes within the tabletops, which hold memorabilia like old postcards, photographs, maps, shells and sea glass.
“I wanted to make the decor as unique as the original Mrs. Mac’s but in a different way,” she said. “I’ve always been interested in Keys history and items that capture the Keys the way they were.” The new menu has some of the classic meals that her regulars will recognize, as well as new dishes put together by Wittke and executive chef Simon Harrison.
“We’re kicking it up a notch,” Harrison said. “We have some new menu items that are made with indigenous products, keeping the absolute flair of the Keys, but preparing them in a little bit of a different fashion.” Harrison was raised in Key Largo and worked at one of Wittke’s former restaurants, the Mexican-themed South of the Border, which she opened in 1994.
For the past 10 years, he has been in California cooking in the entertainment industry for television shows such as “Dinner and a Movie” on TBS and then as an instructor at Le Cordon Bleu College in Pasadena. “I found out through the grapevine that Angie was opening a new restaurant,” he said. “I decided it was time to come home to Key Largo and do what I love with the food that I grew up with.”
Some of the menu items that reflect Harrison’s cooking style include Americana Fresh Snapper, a pan seared snapper topped with champagne lobster cream sauce and Fish of the Day in a Blanket, a prosciutto-wrapped fish topped with a citrus hollandaise.
“We’re also bringing back some of the items from South of the Border like the ribeye and the fajitas,” he said. “It’s been 17 years since that restaurant closed, and people are still asking for those dishes. It must be something they really enjoy.”
The new menu also offers more choices for vegetarians and vegans. Items like their truffle fries, fried vegetables and pasta primavera are marked on the menu with a “V” for vegetarian and “V+” for vegan. Wittke said that she expects the same mix of half locals and half tourists at Mrs. Mac’s 2, but added that she hoped to see more of the locals in the busy months.
“With the new exciting menu items plus a full bar at Mrs. Mac’s 2, they can come more often. I left a lot of the old classics at the original restaurant on purpose, so they can get them there.”
For now, Wittke has no plans to change the hours of operation or close the original Mrs. Mac’s. “I’m just going to let it evolve,” she said. “I’ll listen to what the customers want.”
Mrs. Mac’s 2 is located at mile marker 99 Key Largo in the median and will be open within the next week. Call (305) 451-MACS (6227) for more information.
Posted by Claudia Miller at 12:15 PM